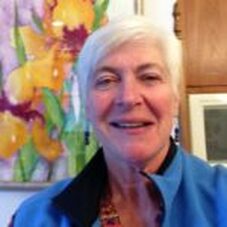 Janet Strouss, Basics and Family-to-Family teacher for NAMI Colorado Springs.
Here’s how Janet Strouss remembers the year 2006: “I felt like I was flying through the galaxy with nowhere to stop down, nowhere to touch down.”

2006 was the year that Janet’s son, Reid, just 16 at the time, experienced his first psychotic episode. As Janet and her husband, Rich, looked for something to ground them, they turned to Family-to-Family, a NAMI Colorado Springs program for people living with a family member affected by mental illness.

Janet says it was a tremendous help; that’s one reason she now teaches Family-to-Family classes. But she also serves as volunteer coordinator for another NAMI program that, had it been around in 2006, might have helped her family recognize what was happening with Reid before it reached a crisis point.

Basics is NAMI’s six-week class for parents and caregivers of children who are showing signs of mental illness. Some adults come to the course after their child has received a diagnosis, but others attend at the onset of worrisome behaviors or experiences. The idea is to learn the facts about mental illness, and how to support a child who is struggling.

In the course of teaching three classes, Janet says, “I’ve seen people sharing stories all the way from 3-year-olds experiencing hallucinations, to people who realize that this is the last six months that they have to guide the path of treatment for their loved one – because once kids hit 18, and certainly once they hit 21, we as parents lose our ability to be the directors of their treatment.”

In Basics – which is always offered for free – participants gather for 2½ hours on one night each week. They learn skills related to managing crises and communicating with a troubled child. They also learn pragmatic information about how to advocate for a child in school and in medical settings; what treatments are commonly offered for specific illnesses; and how to care for themselves during stressful times.

Such material comes from NAMI’s national operation, where a robust team ensures that it is comprehensive and current. But an equally important part of the class is completely organic – the sense of community that comes from sitting around a table and sharing stories.

All Basics teachers have experienced the effects of mental illness within their own families, and they lead the discussion. As people open up about their experiences and fears, students find they are truly among peers – people who know what it’s like to experience problems that are uncommon, unexpected and uncontrolled.

Janet says most people “don’t get it when your kid’s 2 or 3 and having an unbelievable tantrum at the grocery store. But they definitely can’t comprehend it when your child is 10 or 11.”

Some families who enroll in Basics early enough can get in front of an issue before it evolves into psychosis. And more and more research shows that early treatment can help slow, stop, or even reverse the course of a mental illness.

Janet acknowledges that sometimes, those signs can be difficult to read; when Reid seemed depressed in middle school, she figured it was just a normal phase. But where there is any suspicion of a deep-seated issue, Basics provides a non-threatening opportunity for parents and caregivers to learn about the landscape of mental illness – and to learn they are not alone.

“To go back to my analogy about flying through the galaxy with nowhere to touch down,” Janet says, “hopefully coming to a class like this helps you figure out a few places where you can touch down."