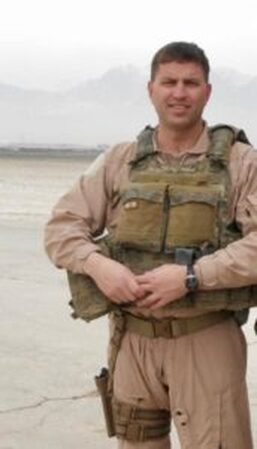 At the heart of Mental Health First Aid is a promise: Learn five simple steps, and you can change — or maybe even save — a life.

In an arena as complex as mental health, it sounds almost too good to be true. How much can you really help someone through a training that lasts just eight hours, and that begins with asking a couple of simple questions?

More than you know, according to retired Air Force Lt. Col. Andrew McCoy.

“For years, I had a lot of suicidal thoughts,” he says. “I probably wouldn’t have admitted it [on my own]. But if someone had asked me, in some of those cases I would have probably said yes. And that could have, I think, short-circuited the whole rest of the process.”

A graduate of the Air Force Academy, he built a dynamic career through his 20s and 30s. He and his wife, Elisabeth, also built a family, with six kids.

In 2005, all of them moved to Bogotá, Colombia, where Andrew flew a plane and worked at the U.S. embassy. In that high-stress environment, Elisabeth started noticing changes in her husband: angry outbursts, depression, trouble sleeping. Still, he completed his two-year assignment.

In 2008, Andrew was sent to Islamabad, Pakistan. There, a vehicle borne improvised explosive device (VBIED) exploded just outside his hotel. It’s pretty clear now that he suffered a traumatic brain injury (TBI) — but even after he returned to the States, there was no diagnosis, and no talk of post-traumatic stress disorder (PTSD).

“I didn’t know about things like Mental Health First Aid or NAMI,” he says, “and I wasn’t really surrounded by people who had that kind of perspective.”

In 2011, he was deployed to pilot helicopters for a year in Afghanistan. Despite the nature of the work, another separation from family, and casualties in his unit, he managed to last the year — a “horrible” year, filled with paranoia and insomnia. He came home with the most tenuous of grips on reality, and with Elisabeth recognizing symptoms of psychosis. With her urging and support, he finally reported his suicidal thoughts to medical personnel and was hospitalized.

In 2014, Andrew was medically retired with a “psychotic disorder (also diagnosed as severe PTSD and bipolar disorder).” Today, he and his doctors believe he probably has had PTSD, a TBI, and severe depression.

With medication, regular visits with his psychologist and psychiatrist, and family support, Andrew has transitioned to civilian life. A couple of years ago, while working for Rocky Mountain Human Services, he took Mental Health First Aid. He was struck by its emphasis on identifying warning signs and shedding stigma, and by the potential within five simple steps, alluded to in the acronym ALGEE:
​ Today, outside his current position as COO of Morning Star Development, he is teaching MHFA to schoolteachers, military personnel and general audiences. And he’s reinforcing the program’s script by telling his own stories. “Being able to talk about it in a forum that’s structured and evidence-based,” he says, “gives me more confidence that I’m not alone and that there’s hope for recovery.”
​
If you’re interested in experiencing Mental Health First Aid, find a training here.