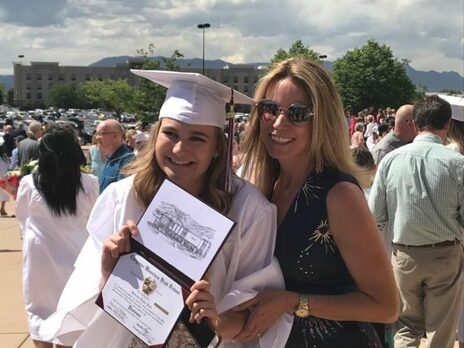 Local attorney Julie Papa joined the NAMI Board of Directors in September 2018, but she wishes she’d known about NAMI a lot sooner.
​
Julie’s daughter Kat struggled for years with depression and anxiety, with things intensifying in junior high. Kat began spending a lot of time in her room, and didn’t enjoy the activities that she used to love. In the fall of Kat’s 10th-grade year, a school mental health survey identified concerns, and Kat told her best friend that she had been feeling suicidal.

​She was hospitalized and began therapy and medication, but kept telling her parents that she didn’t feel any better. When Julie and her husband, Mike, asked the professionals involved about getting her more serious treatment, Julie says they were told that Kat was high-achieving and just needed to stay in school. “We didn’t know what to do,” says Julie. “We were relying on the professionals.”

That February, Kat attempted suicide. She went back to the hospital, and on the advice of someone she met there, began to self-medicate with marijuana. She also used alcohol and Adderall.

Things got worse. And on Nov. 2, 2016, Kat drove her car up Gold Camp Road, put her foot on the gas, and steered toward the edge of a cliff.

She survived the crash, and after a week of hospitalization at Children’s Hospital in Denver, partial hospitalization following that, and months of intensive family outpatient therapy, Julie says, Kat is “a completely different person now.” A freshman at Denver University, she is so passionate about mental health advocacy that she shared her story in NAMI’s 2018 Stepping Into the Light fundraising breakfast video. “I think she feels if there was less stigma,” says Julie, “more people would get help sooner.”

Busting stigma is something Julie and Mike have decided they also want to do.

“We just feel like if we would have known more and been more educated early on, we could have gotten her help before things got so serious,” says Julie. “She struggled for a long time with depression and anxiety that was just not diagnosed. We just didn’t spot it. And then even after she was diagnosed, we really struggled to get good, effective treatment for her, and we didn’t know about NAMI. …
​
“NAMI’s mission to educate, advocate and support is just so important for families like us. I mean, we think we’re educated, but we’re not educated about mental health.”

It’s also why Julie and Mike support NAMI financially — this year, with a generous matching grant.

“Now that I’m familiar with their mission and their programs, I have great faith in their ability to pursue their mission effectively, and I certainly see a need here locally,” Julie says. She adds: “We have an amazing leader in Lori Jarvis, and so I think anyone who wants to donate can also have faith that she’s going to be a great steward of their funds and that she’s taking NAMI in a great direction for the future.”