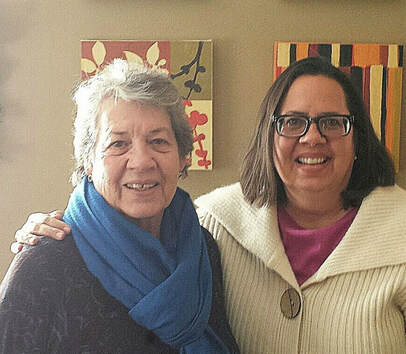 When Karen Anderson – a Duke University graduate and Army reservist – returned from the first Gulf War, her parents quickly realized that she was struggling. New to Colorado Springs in 1992, they sought out the local chapter of NAMI well before Karen was ready to face the prospect of mental illness head-on.

It was an enormous blessing. By the time Karen was diagnosed with paranoid schizophrenia in the mid-’90s, they knew a lot about what they were up against and where to turn for help.

Twenty years later, both Karen and her mother, Mina, have benefited from multiple NAMI programs. Both also continue to give back to the organization as volunteers. We talked with them about why they feel NAMI is so worthy of support.

Mina, on her first NAMI experience: It was a support group for people with someone in their family with a mental illness. These were parents, spouses, siblings. And what I really liked about it is that when you feel like you cannot do anything for this person – who’s an adult and refuses to acknowledge that there’s something wrong – you realize there are many others like you. Many other parents and many other people in the community are going through the same.
​
Karen, on what held her back: I didn’t seek help for so long, and I went through a terrible ordeal, because of the stigma. I knew that I would get kicked out of the military if I was mentally ill, and I knew that I would lose a lot of friends.

Mina, on Karen’s growth since then: Because of NAMI, I think, she’s learned to understand her illness. She has no problems with her medication. She’s accepted the fact that this is what is, and I think that’s what’s been the big difference in her.

Mina, on what advice she would give those who have recently had a family member diagnosed with a mental illness: First of all: Find out everything that you can about that illness. Then: Do it through NAMI. You’ve got the Family-to-Family, you’ve got the Peer-to-Peer, you’ve got the support groups. I also think it is very important to get involved in NAMI. Volunteer and do some kind of work at NAMI. I find that NAMI is like a family. We understand each other. We feel the same pain. And I think that helps.

Mina, on watching her daughter volunteer: When we get these calls from a desperate parent or a spouse or someone else and Karen answers, she’s able to relate. “I know the pain, I know what you’re going through.” And it just kind of gives the caller a feeling of understanding.

Karen, on NAMI’s ultimate gift: I think it really gives people hope that there is something called recovery, and that you can be functional even with a mental illness.