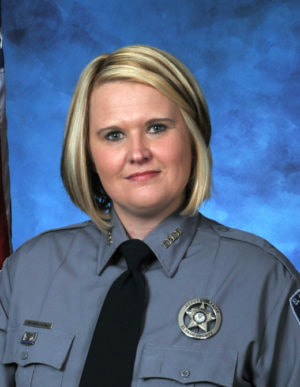 El Paso County Deputy Rachel Lamb. (Photo courtesy of the El Paso County Sheriff’s Office)
One Wednesday afternoon in 2017, a woman alerted the El Paso County Sheriff’s Office that her boyfriend was slicing his wrists behind their locked bathroom door. This was in a southern quadrant of the county, so one of the two deputies dispatched was Rachel Lamb, a 16-year veteran and former crisis negotiator. While en route, she gave the man a call.
​
“The things that he [described] would be upsetting to anybody,” Lamb says. “He described his girlfriend cheating on him. He described previous relationships where females cheated on him.”

The 30-something man also described hating law enforcement, in no uncertain terms. With him yelling “F- the police” into the phone, and refusing to come outside when Lamb arrived, the situation wasn’t unlike some other crisis negotiations. There was one important difference, however: Attempting suicide isn’t illegal. What the man needed was medical help, and Lamb had little law-enforcement leverage to convince him to pursue it.

So while her training with, say, the FBI would help her defuse the emotion of the situation, she would need to call upon another set of skills to convince the man to come outside, be assessed, and receive treatment.

As it happened, Lamb had recently completed Mental Health First Aid training – and, in fact, had become a trainer. An eight-hour MHFA course teaches people of all backgrounds to identify, understand and respond to signs of mental illness and substance use disorders. In a crisis situation, it emphasizes a protocol known as ALGEE:
​ Lamb knew the risk was severe, but she wanted to find out if the man had already cut himself. When she asked him to hold both of his wrists up to a window, he would only show one. Gently – and nonjudgmentally – she persisted.

“He told me, ‘You’re not gonna like what you see,'” she remembers. “I said, ‘I don’t judge. If you’re bleeding, I’ll put a pair of gloves on and put gauze on your wrists, if you’ll let me do that.'”

With similar care, Lamb tiptoed through all of the steps for over an hour on the phone, then with the man on his porch and her in the driveway, and then, finally, with the two of them on the porch. When in his presence, the man’s mental illness – manifesting in paranoia, disjointed thinking and distrust of others – became obvious. Through it all, Lamb leaned on her training.

“I pulled every trick that I knew, and got very personal,” she says. “That’s one of the things we really emphasize in the [MHFA] class to the deputies, is that it’s OK to show that we have a heart underneath our badge.”

The washcloth on the man’s wrist eventually fell to the ground, and she saw that he had cut himself so deeply that he couldn’t move his fingers. It took time, and a lot of scene management – including Lamb’s sergeant sending the other responding deputy away, and Lamb allowing only a single medical responder to approach – but eventually she talked the man into entering an ambulance.

Having been in the field as long as she has, Lamb has seen plenty of law enforcement professionals react with cynicism to yet another training. But she is an absolute believer in MHFA, and says that it has won over her colleagues, too.

“They’re still talking about it a week, two weeks after they’ve taken the class – all positive stuff,” she says. “That says it all.”

The sheriff’s office has committed to having the entire patrol team MHFA-certified this year. Next year, the training will extend to all detentions personnel, who outnumber patrol 3-to-1. As far as public information officer Jackie Kirby knows, there may be 10 agencies in the entire nation that are going so far.
​
“I think it says a lot about this agency, and the heart we have for the community,” Kirby says. “And especially this portion of the community that’s struggling with mental illness.”
Support Us