Mental health is all of us.

We're in this together. 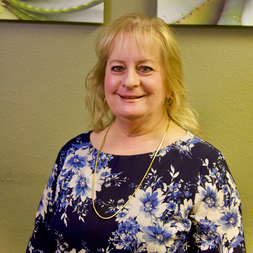 'I fit in there like nowhere else': How Sandy Snider found hope at NAMI
By Kirk Woundy
Sandy Snider’s not sure exactly which mental health conditions affect her loved one; she says he’s never wanted to spend time with anyone who’d diagnose him. But she knows he’s battled addiction and been through trauma … and that she’s experienced trauma, herself, as a result.

When she first came to NAMI in Spring 2022, Sandy was firmly in the first stage of what we sometimes call the NAMI cycle. Over the last six months, she has moved from simply surviving to stabilizing and getting stronger. Now she’s preparing to enter the next stage by giving back as a volunteer, as she readies for Family Support Group facilitator training in December.

At the same time, Sandy is working with her loved one on securing the disability benefits that could improve both of their lives, a longtime effort that finally gained traction when multiple Family Support Group members recommended a local attorney. And after decades spent singlehandedly raising three kids and working as a teacher, certified nursing assistant and mortgage professional, she’s also dedicating more time to taking care of herself.

Below are edited excerpts of our November conversation with Sandy. To protect the privacy of her family member at the center of her story, we have omitted that family member’s relationship to Sandy, as well as his name.

Tell me about what brought you to NAMI.
Last year, my family member ended up with congestive heart failure as a diagnosis because we couldn't figure out what was wrong with him. Then after that, he ended up having to go on medication, and he didn't take his medication and he had a stroke. So he has some permanent brain damage.

The reason he got into some of that, all of that, was harder drugs. The doctors said it was meth, but I don't know for sure.

He decided one day in June last year to take his guns to a neighbor’s house. He told one guy how he was suicidal, so the guy talked to me about it. It was no surprise to me; he's been like that forever.

The neighbor decided he was calling the police and he just wanted me to know. And he started telling me how all of this is not normal. Because you know, it was my normal. It was horrible. I spent so much time locking the doors and the windows, myself …

The police wouldn't come when he called them. They said it was because my family member has guns, and they would have to take the guns away, and did I understand that — “We don't know what that outcome might be, that he might get hurt,” were their words.

The neighbor told me about NAMI before he left, and he gave me all of the numbers and everything before he left. I think I waited a day or so, and then I called.

What happened when you called?
I talked to Emily [Brady, NAMI’s director of community engagement and initiatives]. She didn't feel like I was safe, and I'm sure I wasn't. I talked to her for quite a while. We called the police again, and it was the same response.

But after that, people from NAMI would call me and check on me, and ask how I was doing. That was the part that shocked me the most at first, is that somebody would call and ask. First it was the neighbor who called the police … and then it was NAMI people. And it still is.

After a short time, you tried a support group.
I wouldn't go the first time. I just couldn't do it. I was so depressed … I did not see how I could see any hope at all with my family member. I was about done. And I thought, "Oh, they're going to hear my story, and I'll be so embarrassed ..."

But I went in there, and it was not like that at all.

I remember thinking, “There's no way I'm going to share my story first. I don't want to share it at all.” But it was probably the friendliest, most welcoming warm place, with people telling you, "I'm glad you came." It's always like that. And I fit in there like nowhere else. I don't fit in anywhere but there. I can go in there and say anything.

We're all kind of living similar things, and in there … it’s not going to shock anybody. It's a supportive group. People will try to give you ideas, they'll tell you what they think. The whole thing has been so much help.

I have God and I have NAMI, and those two are consistent.

As you’ve gone to the group and Family-to-Family, has your loved one noticed a change in you?
He could tell the change in me for the better, and what made me stronger. Because, boy, I came to life, I'm not kidding, after I started going to NAMI and talking to [NAMI] people on the phone. After that, it's just like night and day.

The biggest thing is he's said is, I'm not like I used to be. I'm more structured and consistent than I was.

He actually saw so much positive change in me from attending the family group that he went to [Connection Support Group] and isn’t opposed to going again. In the past, he said he wouldn’t ever go to a group.

It's been nothing but better. I can't imagine what it would have been like if I didn't have NAMI.

I know things are still challenging. But would you say that the relationship between the two of you is better today?
It is better now than it's been in forever. My friend just commented on that the other day. I think he can tell I don't have anxiety like I did, I think he can tell I don't get as excited as I did, and I keep telling him the same things.

People out there need to know about NAMI, because I went forever — I could not find help anywhere. People just blew it off and told me what I needed to do and how I shouldn't help him. But really, it's the opposite: The more that you do the basics to help, or give him some little routine, it just helps so much.


NAMI Colorado Springs can offer Family-to-Family and Family Support Group at no cost because of the generosity of its donors. And with more than 80 volunteers helping us deliver programs, we do our best to keep costs low. If you can help support our classes and groups for people like Sandy, please consider donating here.
​
Support Us